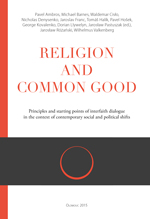 Proceedings of the international conference Religion and Common Good present a Christian view of key issues related to interreligional and intercultural dialogue in the context of political, social, cultural and axiological-epistemological changes in the first two decades of 21st century. Coexistence of different religions and cultures originating often from various civilizations on the territory of Europe influenced many centuries by Hellenic-Christian concept of man and world necessarily brings many exacting problems. European cultural-social-juridical structure based on Christian anthropology often gets into paradoxes difficult to solve, when it encounters non-European cultural traditions, for example: the loss of Christian identity of the basis of European culture vs. the need to protect European cultural integrity. Contributions of world-famous experts on these issues offer critical evaluation of these and many other problems connected with a rapidly changing character of Europe and the whole world.